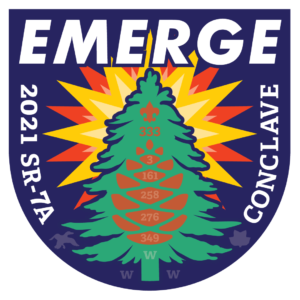 Weather: Partly cloudy and scattered showers on Friday that cleared before most participants arrived. Sunny and warm on Saturday that continued into Sunday

Conclave Service Project: In 2021 the Section partnered with the Peninsula SPCA, a Newport News-based non-profit who’s mission is to find loving homes for every animal in their care, and to advocate for the humane treatment of all animals in the community. At Conclave, arrowmen donated over 900 old t-shirts and used those to assemble over 450 dog toys for those furry friends looking for their forever homes in south eastern Virginia. Some of those dog toys have already been gifted to those playful pups! Peninsula SPCA representatives spoke at the Saturday night show, Fire-Fest, and thanked the Section for the incredible help and service. The representatives announced that the 450 dog toys would begin to be delivered to their shelters as soon as the Tuesday following conclave. The annual silent and live patch auctions were also hugely successful and collectively raised nearly $2,500 that will be sent to the Peninsula SPCA to support their work.

Notes: Due to the postponement and eventual cancellation of the the 2020 SR-7A Conclave, arrowmen of SR-7A were able to gather in person for Conclave for the first time in over 22 months. This was the first SR-7A Conclave not held during its normal late April weekend as conclave was postponed in 2021 from its original date of April 23-25 to its new date of September 17-19. The summer Conclave allowed for new program areas that included the Pool at Pipsico outside of the normal Polar Plunge. Re-introduced this year as an OAHA activity (formerly a Quest competition event) was the 5K race. This was also the first Conclave held were the service lodge used a different council’s camp. The Section’s annual Summit training series continued this year with Synergy Of Our Success Summit; a half-day program oriented towards current and aspiring chapter leaders.

Did your team place in Annual Cornhole tournament? We'd love to update our website to record your name. Send us a message at support@oae9.org and we'll get this table updated.

Adult Amusements was a new program area introduced at the 2019 Conclave. One of the aspects of the program for 2021 was an inaugural Dutch Oven Cook-Off. Did your team place in our 1st Annual Dutch Oven Cook-Off? We'd love to update our website to record your name. Send us a message at support@oae9.org and we'll get this table updated.